Does anyone have experience with how they compare to their one-watt 900MHz HTs? How do they compare in thirty-floor buildings, shopping malls, cruise ships with many decks, and absolute range across the Grand Canyon or rooftop to rooftop? What about fancy operational bells and whistles?

Your best best would be to talk to a dealer who has experience with using them the way they were intended. You are talking about many different scenerios and no one radio would be great in all those cases. If you are concerned about range I wouldn’t even bother with the 100mw version. 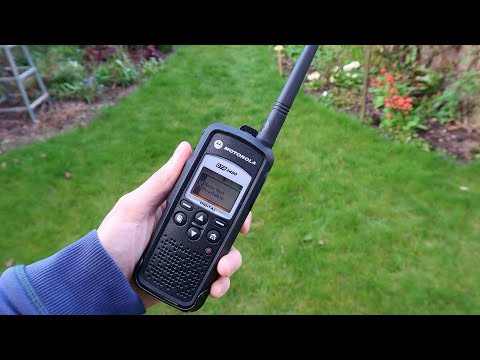 I believe the 2.4 GHz radios have been discontinued, but you can still find a few used ones for sale in the UK. They would not be legal to use in North America.

As to comparing the two models, I doubt anyone has done a direct comparison.

If you are in the UK, it appears based on range tests that the range is similar to the 1 watt 900 MHz radios.

If you are in North America, based on my own back-to-back range tests, the 900 MHz radios have about the longest range one can expect with a handheld UHF radio. Plus, at the farthest end of their range, they still sound 100% clear. Once they go beyond their range, they do not transmit at all, as opposed to analog radios where you might get some scratchy signal fading in and out a bit.

Folks who have used them on cruise ships where allowed, have reported that they are the only UHF radio that can penetrate to almost every deck on board a ship. They far exceed the performance of most analog radios.

No two way radio can refute the laws of physics. In an urban environment, you would be lucky to get eight blocks. In wide open terrain with no hills or obstructions in between, you are still limited by the curvature of the horizon. You might get a few miles.

Don’t worry too much about power. The 1 watt in the 900 MHz band is plenty, and would compare to an 8 watt in the 400 MHz band. 100 mW in the 2.4 GHz band is, again, plenty. Range is more dependant on quality of the receiver and antenna combination than ultimate power.

I did not realize that they were only authorized for business use in the UK (that is the video that perked my ears up), but would they be legal for use in the 13cm ham band on this side of the pond, or is their hopping around the band too much like scrambling?

Motorola uses their own proprietary frequency-hopping algorithms and cannot be programmed for any other frequency or band. That’s what makes them so private. No one can monitor a conversation on a Motorola DTR or DLR unless they have a Motorola DTR/DLR radio, and even then it would be virtually impossible with almost 100,000 channel and ID combinations to choose from.

The downside is of course that they can only communicate with DTR/DLR radios and cannot integrate with any other radio on the market.