This is the default channel/frequency range: 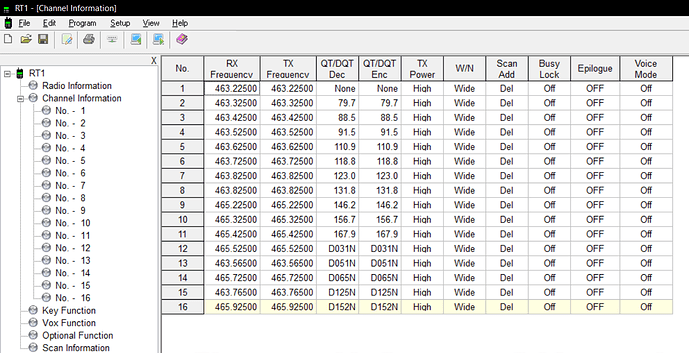 The manufacturer states this unit can be programmed up to the 520.00000MHz range.

The manufacturer also claims to TX at 10W.

I’m going on a cruise and wanted to program my units to the best channel/frequencies possible that will take advantage of the 10w proclaimed by the manufacturer .

To do what? Be aware that some cruise lines have a ban on radios so you will have to smuggle the radio on board, and one radio wont really give you any people to talk to as GMRS is American and cruise ships rarely stay in America, so on a ship, the use of radio is totally under the captain or masters control. The boat wont be American, even if it appears to be, it will be registered in some foreign country. Radio hams occasionally get granted permission to use a radio on board with lots of paperwork. Random passengers walking along with a radio will draw the security folk. Hiding them can be even worse. Expect it to be spotted during x-ray on most cruise lines. Most radios on board will be a mix of marine analogue VHF and digital, both UHF and VHF.

What are you hop8ng to do with it?

Thank you for chiming in. Wow, I did not know about the stringent restrictions and the floating locale/origin of the ship while at sea.

My cruise is up the East Coast to Canada with Norwegian.

I’ll need to contact the cruise-line to inquire about any radio restrictions.

My primary use will be to keep in contact with another family member while onboard.

Oddly - I hate cruising but When I was teaching, loads of my college students had great times working on board, but rules can be amazingly strict on any subject, let alone anything they may consider safety linked. Since then I’ve been on ships doing rigging and as visiting bands, and P&O, for instance would not allow us our walkie-talkies, because they did not have time or inclination to investigate and test them, so just handed us some of theirs - so it’s not really radios they don’t like, but what they could be used for. So many come with frequencies totally banned. Yesterday a new VHF radio arrived and when I downloaded the radio, it was programmed with marine band channels - I had not asked for this, but they were not the real marine frequencies, which use a mix of simplex and semi-duplex - just 25KHz channels starting at 156.000 (An emergency coastguard channel not available to the public here) and going upwards for 128 channels! Anyone buying these could cause serious problems and because they were set for simplex, they might be totally unaware as they’d not hear the coastal stations using them. This is why they hate random radios. The RT1 is a decent radio but just because it can be programmed for a set of channels, in some jurisdictions this is still risky, approvals wise. You also need to keep in mind the people you speak to at the cruise line won’t be technical, and are very unlikely to pass your request on.

For what it is worth, I’m aware that lots of the groups of workers (mine were the singers, dancers and technicians) use zello on their phones, using the ships internet. Data usage is minimal, and they set up big groups, so the friends can all hear each other. Using a phone also makes them inconspicuous, and as there are nodes everywhere, they work in cabins and anywhere. Radios are actually rubbish - radio to radio, as everywhere is metal compartments that are very range unfriendly.

Thank you for replying. Very in-depth and informative information. A lot to consider. Leaning towards, “just leave them home”

Understand that Chinese manufacturers generally program these radios with random default frequencies and expect end users will program them properly. Using any of these frequencies mean you will possibly interfere with licenced users, and can possibly even interfere with critical public safety transmissions.

Personally, I would check with the cruise ship line for their policy on GMRS/FRS radios, and if allowed, I would program them to the FRS channels. Just be careful not to use them inside territorial waters because these radios are not certified in the U.S. or Canada for either GMRS or FRS channels. But outside territorial waters - which is where you will get the most use out of them - the rules don’t apply. But please delete those default frequencies and check with the cruise line.

Lots of passengers use FRS, GMRS and Motorola FHSS radios; but some cruise lines will only allow radios that are bought or rented on board. If they do allow personal radios, just reprogram them and avoid use in illegal territorial waters, and enjoy the radios.

You can never guess with cruise ships. Their rules are crazy. status is everything. On some lines, crew members must leave an elevator(lift) if a passenger gets in but on others it’s fine. Some have a very strict NO alcohol rule and have a cut price bar for the crew, others allow certain grades to talk to passengers, but they must remain standing. If you are one grade above, you can sit with a guest, but not drink. One grade above, you can drink with the passenger. You can see how radios could easily be a problem, but these restrictions don’t creep into the documents you’ve got.