I am a technician for a school district. The district recently purchased some DTR700 to add to our current fleet of DTR650. However, with the new model, we cannot program the radios to work the same as without the DTR700.

Currently the 650s are setup with private groups. So an administrator not in the custodial group can call all three custodians without being in that group.

However, with the 700s, I am finding out this isn’t possible. Plus, it also won’t call a radio if the radio that is calling doesn’t have the same channel pulled up in the scroll list. This is a huge problem for us as it can be a safety hazard to not be able to reach certain contacts. 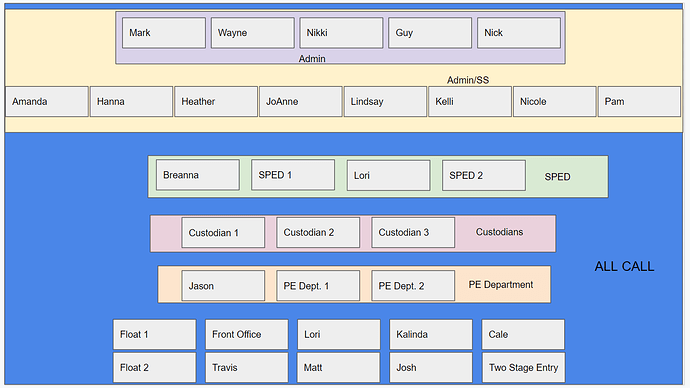 This is our flow chart. Front Office should be able to call custodians without being in the group. Because if Float 2 calls custodians next, Front Office does not need to hear it.

For a very simplistic explanation, the DLR radios look for Profile ID numbers to determine radios within its groups; the DTR radios use Group ID numbers. DLR radios dropped private groups because there was really little need for it. (I have never used a single private group.)

In short, I would reprogram the DTRs so they use public groups only. No security issues because you will still have thousands of combinations of hopsets. (“Channels.”) Then you will need to adjust the programming of the DLRs so they look for Public Group ID numbers, instead of individual radio ID numbers. You do this by turning off profile ID number lock in the DLR programming.

Also, your DTR public groups can be channel 1 to channel 10, but your group ID numbers must be from 21 to 100.

Here is a guide to getting the older radios talking to the newer ones:

Integrating DTR and DLR radios can be done but there is poor documentation on how to do this and it was up to certain dedicated enthusiasts to learn on how to do it. Integrating DLR radios with existing DTR410, DTR550 or DTR650 radios The key is to understand the differences in how these radios communicate with each other. The older DTR radio sends out a handshake signal on a channel, which is not really a channel in the traditional analog sense; it is a programmed frequency-hopping algorithm …

DTR700 radios can be easily integrated into a fleet of DTR650 radios and work in public and private groups with the legacy DTRs. Public group IDs can start at ID = 1 instead of 21. There is a lot to unpack here. See below.

I have owned a fleet of DTR700s, a fleet of DTR650s, and a fleet of DLR radios and had them all working together on public and private groups. My public group IDs start at ID = 1. I also had the Profile ID features working between the DLR fleet and the DTR700 fleet. I later sold my DLR fleet to a friend for his business but I still have my DTR650 and DTR700 fleets. Getting the DTR600/700 models working with the legacy DTRs can be done quite easily after you learn and understand how the DTR700 programs and un-learn a few things about the legacy DTR410/550/650 models. The DTR600/700 models program like the DLR series radios.

The DLRs and the DTR600/700 models added Profile ID features to make it insanely easy to secure a fleet of DLRs and DTR600/700 radios right out of the box without needing to program them with the CPS. Customization of features and settings and access to all features still requires the CPS. The DLRs and the DTR600/700 models have a 4-digit Profile ID Number (PIN) that you can set to easily secure your channels. The default PIN is 0000 (off) and can be programmed from 0000 - 9999. The PIN modifies the group ID and hopset for the first 20 public groups (IDs 1-20). This feature is compatible with public groups in the legacy DTRs only when the PIN is set to 0000 (off).

There are 2 methods available to program public groups in the DLRs and DTR600/700 models and have public group IDs start at ID = 1.

NOTE: Setting the 4-digit radio PIN has to be done carefully. Choose a favorite 4 digit number that’s easy to remember and hard for others to guess. Don’t use anything obvious like 1234, etc. Also note that the last digit (4th digit) of the PIN sets the hopset the radio uses. PIN = XXX1 means hopset 1 will be used. Hopset 1 is the default hopset identical to “Channel 1” (hopset 1) in the legacy DTRs. PIN = XXX2 means hopset 2 will be used, etc. PIN = XX10 means hopset 10 will be used. The hopset used applies to the whole radio unless the Profile ID Number Lock on the ADVANCED page in the CPS is unchecked (off). The default is ON (checked). Disabling Profile ID Number Lock has to be done with caution because the hopset on channels then becomes editable and other programming may cause some features to not work if the hopset is changed. The CPS warns about this. I recommend leaving Profile ID Number Lock ON (default) and choosing a 4-digit PIN carefully and with the last digit (4th digit) of the PIN matching the hopset you want to use. This assumes all programming in the radio uses the same hopset. The Profile ID Number Lock will need to be disabled (unchecked) if your programming uses more than one hopset.

The Page All Available (Profile ID = 19) and Call All Available (Profile ID = 20) features are new Profile ID features in the DLRs and DTR600/700 which the legacy DTR410/550/650 models don’t have. These are All Call features and useful for contacting multiple groups of users which may be spread out on multiple channels. All users can be contacted without having to manually call them on each channel to locate them. Call All Available causes all radios that are currently not busy in a public group call, private group call or private 1 to 1 call to be put into a temporary super group with a 4 second hang time. All users can all talk to each other provided they press PTT during the 4 second hang time. After 4 seconds of inactivity, the hang time for the temporary super group expires and all radios revert back to the channel they were on. Page All Available is used to page all users currently not busy and allows only a single user to respond using the 1 to 1 Private Reply feature. Page All Available works similar to Call All Available in that it throws all responding radios into a temporary super group with a 4 second hang time but PTT is disabled and only the 1 to 1 Private Reply feature can be used to reply to a page. This ensures only a single user can reply to the page and doesn’t bother other users with a reply. These features allow calling everybody at once and without having to manually call on each channel to locate each group of users.

I’m not surprised Motorola adopted the DLR way of programming going forward. I find it more straightforward and less cryptic than programming the legacy DTRs. The Profile ID features added new features which make it insanely easy to secure channels in a fleet of radios right out of the box without needing the CPS. The DLRs and DTR600/700 appear as channelized radios to end users similar to conventional radios.